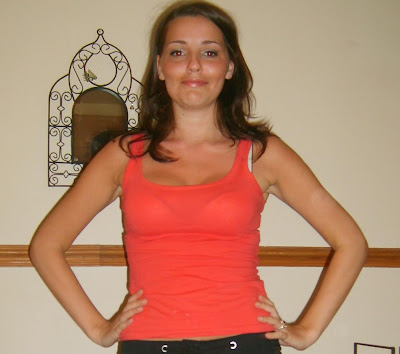 It's been a while since i have wrote but i guess i've not had that much to talk about. I've been doing ok really. Not made any great progress but managing to maintain the progress i had made over the last few weeks. I am still going out everyday, even if i am only sitting in the garden. I feel i have been really busy lately which is bizarre. I have had the kids a lot so obviously they keep me on my toes. I am a moderator on a travel website and i have been seeling a lot of skin care products on Ebay for my friends shop. So all of combined has kept me very busy and very tired. This is a good thing of course as otherwise i would probably be sitting around over thinking things, and thats never a good idea.

I have been out walking more though. My friend Alison and i said we would try walking once a week and take it further each time. So i have managed a decent walk so far... further than i have been going lately and hopefully next time i see her i will go further again. Alison is the women who will be doing EMDR with me. She has completed the first part of her training but he tutor told her not to work with me untill she has completed the advanced part of her course haha. Makes sense!

As i mentioned i have had the kids alot. Only Luke but he has found himself a little friend called Lee who has attatched himself to my leg and doesnt leave me alone. He is a wee cutey but so full of life it is exhausting! This picture was taken on Friday night when they decided to be superheroes and 'protect the city'. It was a fun night. Things with Luke have been tough though. I have spoken in previous posts about him having Spina Bifida. He has no feeling in his legs from the knee down. As he is getting older it is getting much harder for me to deal with. My heart breaks for him as he is getting very frustrated with things. Like yesterday for example i took him out on his bike. His feet need to be strapped into special pedals but the bike itself doesnt go very fast. Lee wanted to race which meant Luke was always last. He ended up getting upset and punching the bike and driving it into walls. Its so hard to watch but what can you do? 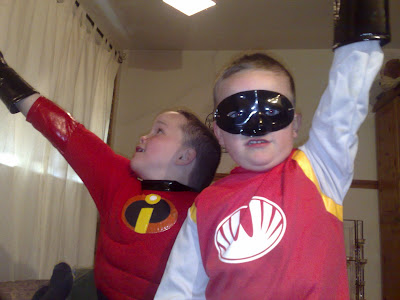 While we were out with the bike the boys decided they wanted to go to the shops and get sweets. Well this can be a challange for me at the best of times but with 2 kids in tow i didnt think i would cope. I didnt say anything to them but headed towards the shops and hoped for the best. I got really close but the little thoughts in my head took over.. what if i panic when im with the kids? Will i freak out in front of them? What if i can't get home quick enough? How will i cope with Luke? He cant walk so id need to carry him. He weighs a ton.. then id have to unstrap him from his bike and restrap him in etc etc. So the thoughts won. I did try twice but Lee was constantly telling me to hurry and i guess i was under too much pressure haha. I took the boys home as Luke was exhausted from the bike ride. When they were settled in the garden with my mum i grabbed my mp3 player and got back on my bike. I headed to the shops again just for me this time. I got metres away. I could see the shops but i just couldnt face getting off my bike, going to the ATM, waiting in queues etc so i turned back. For a while i was overcome with frustration and had to sit and chill out. Looking at it now i know i stil did well. Anytime i have been going to the shops recently i have had someone with me so i have felt more able to push myself. Maybe i wasnt strong enough yesterday to attempt it alone? But that wont always be the case. Plus i still TRIED! I wont beat myself up about it.

Then there is Chris. Things are still going great and i am very happy. However, its not summer and i told him that in the summer i would do more with him and that i would eventualy move in. A couple of times he has commented that he hasnt seen any progress. He knows i am doing more everyday but he is working then and doesnt get to see that for himself. It is his birthday on the 15th of June and i have been buying gifts hoping to make it a nice day for him. Now though he has said the gift he would like is for me to book a table somewhere nice and for us to go for a meal. I know he would never pressure me and if i dont book it he will be fine with that. In fact let me be realistic here... i wont be booking it lol. I will get us take out no doubt but i will set the table and light candles haha. But seriously the worries are there again that he is gonna get bored of me soon. Hes has been so patient with me but it must be hard for him. He has taken a few days off work at the end of the month and thats when we are gonna attempt doing somethings, mostly just driving together though. It will be interesting to see how that goes.

I havent seen the therapist again but we are going to arrange a date. Last time i spoke to him he was gonna check his diary. The nurses who came to visit me having got back to me to let me know what will be happening with them. Probably CBT i would imagine.

So as i said its been busy busy with one thing or another. No major panic attacks, the anxiety has been pretty much gone too. I do have my wobbily moments but i guess i can live with those. My diet is still going relitively well. I have gone from a size 14 to almost a size 10. I have actually ordered a pair of size 10 jeans which will arrive this week so i am hoping i can get into them. It would feel totaly amazing if i did. If i don't though it will give me something to aim for... and then i will stop. I'm pretty tall at 5'9'' (and a half ha) so any thinner i think i would look silly. I dont want to look like a lolly pop! I hope everyone else is doing ok and if not just remember that 'this too shall pass'. Things can only get better is what i tell myself.

If you haven't checked it out already, look at www.Disaboom.com It's a good support site for disabilities of all kinds, including spina bifida.