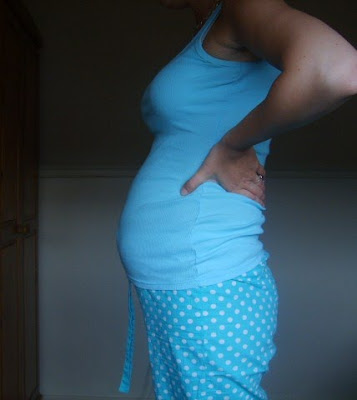 Well I am a big chicken. I got so worked up about my scan appointment that I couldn't go. I felt absolutely awful about it. I have a feeling that anyone else with agoraphobia would have bit the bullet and went for the sake of their wee baby. But i just couldn't do it. It has been a very stressful time and as the date approached I was getting more and more anxious about it. The night before the scan I didn't sleep a wink. I felt very sick and the start of a panic attack was looming over me.

I visualised the drive and tried to imagine all the excitement and happiness to be gained, I listened to relaxation cds and told myself i was excited about the appointment, i think i was trying to trick my brain.
We had had a week of fantastic sunny weather and since the weather plays a huge part in my mood i prayed for sunshine. I watched the weather reports on the days leading up to the scan in the hope that the sun would shine and everything would seem just a little easier. On Tuesday morning when i knew it was time to get up i looked out of the window. It was the most gloomy grey wet day we have had in weeks. I started to get dressed but the feeling of impossibility just wouldn't go away. I definitely had my negative head on and no matter how hard I fought it, it wasn't going away either. I know myself and I know my limits. I knew that in my current state I would probably get half way but that would be as far as I got.

I broke the news to my mum and i felt extremely guilty. She was coming along as the expectant grandparent looking to see her little grandson/daughter for the first time. Gerald parents were also aware of my appointment, as were all my friends. They were going to think I was pathetic.

I called the hospital and they said they would get back to me but everything sounded so uncertain. Now i had reached 12 weeks and had only ever seen a midwife once, and that was only to confirm my pregnancy. I called my doctors to arrange an appointment with the midwife asap only to be told shes fully booked for a month. I knew i couldn't wait that long. Anything could be going on inside me. Was the baby even there? Having miscarried last year that has been gnawing at my brain constantly. I knew i needed to be seen and the sooner the better.

I called the hospital again and explained the situation. They couldn't have been nicer. I am actually really surprised with how well they have handled it. Today a midwife turned up at my house and took all my blood tests. We went over lots of information and then she had a feel of my tummy. I was prepared to ask her if she could have a listen for the heartbeat, but I didn't have to ask. As she brought out the machine she warned me not to panic. Being only 12 weeks pregnant, there was a high chance that they wouldn't hear anything but she assured me she would try her best. She also told me that it may take her quite some time to find anything and so i would just have to be patient. But it was within 5 seconds of the Doppler hitting my tummy that we heard it. Dum Dum, Dum Dum, Dum Dum. It was unbelievable. My little baby was in there loud and proud. I smiled and laughed I was just in total awe. The midwife said herself that she couldn't believe how easy it had been to find and how strong it sounded. Then she told me that they are arranging me to be scanned in my local doctors as they have found a portable scanning unit.

Now I don't like to think of people running about after me but I have to admit I am massively relieved. My pregnancy is going ahead like every other woman out there and i don't have to go to the hospital at all so can avoid all the stress of travelling a great distance. The midwife told me that my consultant is a lovely man who is very understanding of my situation and that he is bending over backwards to help me. I don't have to tell you how grateful I am.

So tonight as I write I am happier and calmer than i have been in weeks.

I had been dying to tell you the news sooner but I had to be sure all was ok. It has been a very difficult time. Obviously you have read about the breakdown of my relationship and I think i discovered I was pregnant the very next day after writing that post. So you can imagine how shocked I was. I have had days were I have been filled with panic about how I can cope. My body is no longer within my control and since I am such a control freak this has been hard to get used to. I didn't want a bump! I didn't want to feel something move inside of me. What if it was wriggling about and I didn't like it and couldn't make it stop? I was just being neurotic as always and as the days and weeks have passed I have looked forward to my tummy expanding, although it is doing it at such a rapid rate that it is welcome to slow down a little ha. Also I am wise enough to know that babies don't make relationships work and so it looks like I am going it alone. The house hunting is continuing but all the necessary people know i am now expecting and so i hope to be offered something as soon as possible. Then i can start building my wee nest. My next appointment isn't for 4 weeks but I should receive a letter about my scan before that. Hopefully I will have a picture to post soon.

Thanks for all your lovely comments. It was lovely to hear from people who have never written before and I am glad to share my happy news.