More kids and a sleepy Me

Remember me??  I used to write a blog on here but got a bit caught up in other things and forgot to write a post for almost 2 months.  Tut Tut, this just won't do!  So here I am Hello my friends :) :) :)

Well, whats been happening in my little bubble lately?  Honestly, not much! Meh

Ok so we've had the tale of the ex partner and the day he lost his marbles but luckily things on that front have been pretty quiet.  Oh no wait, that's not 100% true.  I was contacted by a girl to tell me shes been seeing him since New Year but recently just broke up as she was tired of being treated like dirt.  This girl is lovely and has been lied to just like i have through the years.  I have no issue with her whatsoever, just another unfortunate victim.  But was a little put out that she had spent quite a bit of time with Nathan, which i obviously had no idea about.

And so the bickering with myself and the ex continues.  Purely down to the fact he isn't capable of the truth and when it comes to my son i would really like him to respect my wishes.  I.e, if he has a new partner can he make sure its serious before involving Nathan, and maybe let me know whats going on (is this unreasonable)?  Anyway this has resulted in him kicking off (again) because he doesn't like to live by anyone's rules but his own.  This might sound like I'm being unfair but I'm actually describing him perfectly.  Having researched some of the things i was faced with in the past, it looks like i was in a 4 year relationship with a sociopath.  This has actually freaked me out to be honest, but it explains so much to me and gives me a certain amount of closure.  No wonder he had no empathy, patience, loyalty and guilt... hes a sociopath.  Now i know the signs i can happily say ill AVOID these types in future and so i look forward to what will be a breeze compared to my previous relationship.  I must be strong after all because i have put up with A LOT.

So onwards and upwards as I always say.  The summer here has been no existent.  A complete washout!  So the weather always plays a part in my everyday activites, especially when considering what to do with a little 'un.  We've had a few nice walks, a few trips to the park, lots of house visits to other friends and their kids.  But really not much with regards to progress.  However, due to the relationship breakdown with Nathans dad, he hasn't seen him for a month.  This means i get no time out whatsoever.  On top of this it seems Nathan has entered the 'terrible two's' a couple of months early.

He is nuts!!! Lots of fun things been happening around here.  Where to begin?? Oh he has discovered a lovely noise he makes, which he will repeat for hours on end in the same tone, which is enough to drive the most calm person to the end of their tether. 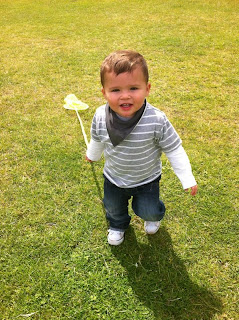 That sums about about an hour of my day.  Of course there is much more than that going on and it is EXHAUSTING.  I'm like a broken record, my new mantra is 'im so tired'.  I'm actually sick of hearing myself say it.  So perhaps an excuse, but i find it hard to make new plans, look at ways to progress with my 'pushing boundaries', most of the time I'm just trying to stay awake.  In between the dirty nappies, dinner breaks and story telling, we have made a few trips but nothing to really rock my world.

Also my mum has decided to give her house a long overdue make over, and so since she suffers arthritis and other ailments, i stepped up as chief painter.  So picture me with roller in hand, speeding round the house with Nathan Argh, argh, arghing at my feet.  Fun times! This usually patient girl has had a few hissy fits herself!  This just equals more exhaustion.

Something i was grateful for this summer was Nathan making himself some friends.  For 1 and a half it seems hes quite popular with the local kids, and so it seems is his mum!  It seems bizarre that I have 6 and 7 year olds appearing at my door to ask if 'Nathan is coming out' but it relieves a bit of my guilt about not doing much that week. So Nathan and myself will go to the little play areas with all the kids.  Yes, when hes older he can go alone but its far to early for that.  This means some of the children like to follow us home and have also come into play for a while/wreck the house.  Queue more work, more exhaustion.

One of the little kids who started to appear was a 7 year old girl called Neve.  Imagine a scruffy little thing, always dirty, hair always needing a brush and FULL of energy and naughtiness.  That's Neve.  The other kids seemed to give her a hard time but Neve was quick to lash out, giving her a reputation as 'bad' as well as being known for telling a lot of lies.  Well I'm not quite sure what done it but Neve has taken a MAJOR shine to me.  I'm not going to go into it too much but i get the impression she doesn't get a lot of love or attention at home, and so shes found a softy in me and is clinging on for all its worth.  She now appears at my door everyday as soon as school breaks out.  We have baked cakes, gone shopping, done the garden together, shes come to my classes with me.  I was really concerned as to what her parents would think since they had never felt the need to meet me (i would be very concerned if Nathan told me he had befriended a 31 year old and was eating dinner in her house!!!) , and so i chapped on their door and introduced myself.  They are perfectly happy with it and to be honest i think they like the break as Neve is a HANDFUL.  So i now feel like i have 2 kids!! More exhaustion. 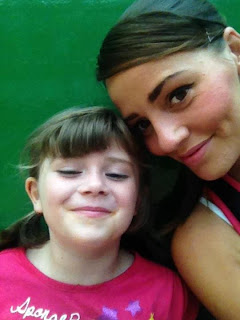 (i found this necklace and note posted through my door.  I returned the necklace to her mum but kept the note lol) 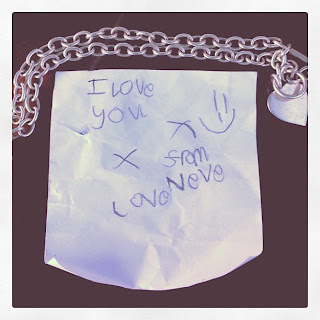 My classes that I loved going to have been less frequent.  More so because my friends seem to have moved on from their sudden interest in keep fit, and they no longer go.  This means i need to go alone, and although i have done it a few times, its much easier to say i cant be bothered when i know I'm not letting anyone down.  but I'm letting myself down.  I really love my classes, its a bit of adult time for me and a little break from the demands of kids, and so I'm going to make a point of doing more.  Its not as easy doing it alone, but ill try my best.  You would think this would leave me even more tired but actually it give me more energy.

Ive still not had much of a social life and obviously I'm at home every night with Nathan but i know this needs to change.  I need to look into getting a sitter and having the odd night out.  I know it will do me good, perk me up.  We all need some time out, and so ill sort it out... eventually.  I have a christening to attend in 2 weeks so that's something to look forward to (or worry about).  Lots of adults having fun, obviously i could take Nathan but i think for that day ill give myself a break and relax!  However, its at the edge of my comfort zone and ill probably find it hard to 'relax' but ill soon settle.

Speaking of christenings, Nathan has never been christened.  I'm not a regular church goer by any means, but i do have my beliefs and so it seemed natural that when Nathan was born he would be baptised like most babies.  Unfortunately, due to the state of my relationship last year, i was in no frame of mind for it, things were far too messy.  But i always regretted that it hadn't happened.  And although this year things aren't much better, i decided that its been long enough.  I contacted the local church and now i am just waiting on a date.  It wont be a big event like christenings are these days.  Loads of friends and family in the church followed by a big knees up somewhere.  It will be much smaller, with just a handful of us, no big party.  Just me and my son at the alter doing what i should have done long ago and I'm really looking forward to it.

So i guess this is why theres been a bit of a break in writing.  Ive made no big breakthroughs, felt there was nothing of great significance to tell you.  Could beat myself up about what I've NOT been doing, but while I'm actually sitting here writing this, i realise theres a lot i HAVE been doing.  Hopefully my next post will be far more focused on over coming a few obstacles.  On that note i bid you farewell, hope you all doing great and i am off to the land of nod.  Oh do you have agoraphobic dreams?  I always do.  I'm always far away and trying to get home.  Not anxious, just in a hurry hmmm. xxx