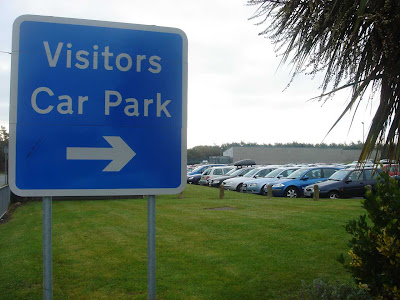 An article in The Sunday Mail newspaper yesterday -

A desperate panic attack sufferer has been living in an NHS car park for FIVE Months. The 29 year old woman is sleeping in her car outside an A&E Unit - with the knowledge of doctors and police - since November. She is severely agoraphobic and only feels safe in the car park where she is near doctors.

The women said 'My life has been turned upside down. I no longer have much of a life being stuck here. 'I'm a bit embarrassed about it because I know its not a normal thing to do but I cant help it'. 'During the winter, it was freezing and very hard to stay out here'.

NHS bosses and Strathclyde police discussed the situation but were unable to give the women the medical help she needs.

Yesterday, her boyfriend, who brings her food everyday, claims the authorities abandoned her and are only acting now after the Newspaper approached them on Friday. He said 'We have been trying for months to get this horrendous situation sorted out and nothing was done'.

His girlfriend spends hour after hour in her hatchback and is known to staff and visitors. Occasionally she steps out to fetch food and drinks from the hospital shop or to wash or use the toilet.

her agoraphobia triggers panic attacks and makes her terrified of nearly all public places and open spaces. She has slept in her car every night through Scotland's coldest winter in 30 years with her boyfriend bringing her food and sleeping bags.

The women developed a mild heard flutter in October which triggered anxiety and panic attacks and led her to believe that she could die if she was not close to A&E staff. She is currently on betablockers to calm her nerves.

The women said ' I started getting panic attacks - I suffered palpitations and struggled to breathe'. 'It seemed to come out of the blue - there was nothing specific that caused it. I know it's not a normal situation bit the symptoms are very real. If I leave this area for any length of time I start to feel extremely unwell and panicky. It is a feeling that is so bad, it is difficult to describe it unless you have been through it yourself'. The hospital facilities are very good and I can nip in to use them. My boyfriend also comes down to check on me and make sure everything is alright. He is very worried about me, as are my family. I normally have my dogs for a few hours a day, that cheers me up. The days can be quite long but I have a laptop and a mobile phone to keep me occupied. I had the heater in the car for warmth and blankets but it was still very cold. A lot of people have agoraphobia but they tend not to leave their house of somewhere they are very familiar with. Before all of this my life was totally normal. I went out for meals, went to the pictures and did everything that a person in their 20s would do. Whenever I try to leave, I have a very bad panic attack and I have been in A&E a few times. I have been in the psychiatric ward but they just want to keep you in for a few days and you sit bored watching TV. The ward doesn't deal with my anxiety. There is a lack of services for people like me but the hospital staff have been very nice to me. I cant fault the staff at the hospital. They make sure I am OK and have done as much as they can but my GP wasn't much use. I have been told I would have a 3 month waiting list to see a psychologist. They can give you medication for anxiety but I want to avoid all that. There is also cognitive behavioural therapy'.

Her boyfriend said the hospital had been in contact as soon as we asked them to comment on Friday. He said 'Thank goodness things are now moving. Officers would check in from time to time to make sure she was OK and her case was always brought up in meetings between health officials. They have been very dismissive with my girlfriend from day one. They seem to be working from a textbook that doesn't fit the template. This has been awful for us. During the winter I was basically keeping her alive. I was making sure she had petrol and food and enough heat to stay alive. I used to be into mountaineering and took her a sleeping back that is for minus 50 conditions. She gets food from the hospital canteen or we have a take-away. Sometimes I make some food and bring it down wrapped in tinfoil so she at least gets one square meal. I have also tried to get her back to the house now and again. But we can only do that when our doctors surgery is open so that we can make a stop their for her to get calm again. Then we can make the last leg of the journey'.

Some medical staff at the hospital are concerned the woman is not receiving the care she needs. One said 'She is caught in the middle because she is not so psychologically ill that she needs to be sectioned. But on the hand she is clearly not entirely well either'.

The woman's boyfriend added 'Cognitive behavioural therapy has been discussed but there has never been any concrete attempt to actually do it. The best way to deal with her issues would be some sort of talking therapy or even a psychologist to comes and talk to us.

So what do you think of that??? Do you feel great sympathy or do you feel frustration? I feel both. I can complete empathise with this poor girl and the lengths she has gone to, to avoid panic attacks. She must feel like she has lost her mind and completely alone at the moment. Her situation only began at the end of last year and so it is relatively new, therefor it is probably extremely scary for her. I know that many people, even some of you readers, will try to avoid medication, but I felt a little frustrated that the girls situation is so extreme but she isnt willing to at least try some kind of medication. I think if I got that bad I would be trying ANYTHING to make the situation better. But for those of us who have dealt with this for years surely we can offer her a bit of hope? I actually considered contacting the newspaper to see if I could help in anyway. Maybe the girl just having someone to talk to who has been there would help? or maybe I can tell her their is help available if you just know where to look for it??